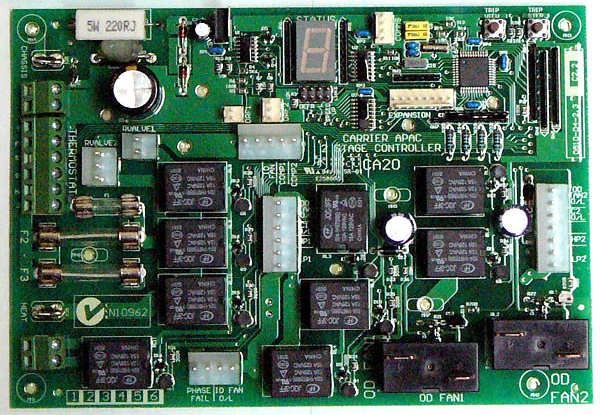 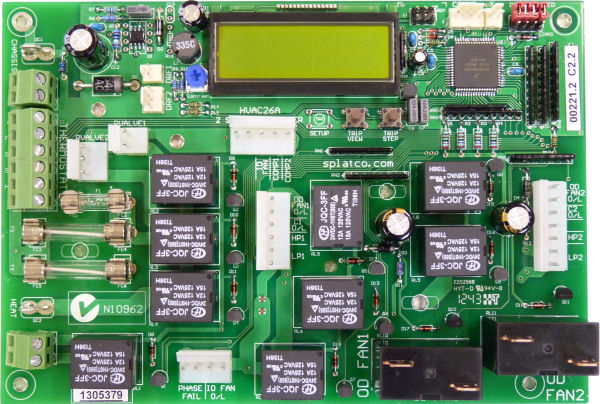 Carrier-Apac, in Perth Western Australia, was a subsidiary of a $35B world-wide air conditioning conglomerate. The Apac strong suit was large, multi-stage reverse cycle "heat pump" units, of the type that get hoisted onto the roofs of factories and office buildings using a crane or helicopter. Apac were controlling their units with a mash-up of single stage controller boards, made by a sister company, plus sundry relays and timers. It was basically a mess. It was costing them dearly in skilled labour to wire it all up and test it, and it didn't provide any of the flexibility demanded of modern systems.

In 2000 we were invited to propose a better solution. The final outcome was the CA20 air conditioner controller. The CA20 is a two-stage controller, and two of them can be ganged together via a simple cable to control 4-stage heat pumps. It includes dedicated circuitry for safety interlocks (even if the processor goes berserk, the safety "chain" will work), a number of 24VAC relays for controlling solenoid valves, and two heavy duty relays for directly controlling 240V outdoor fans. It features a simple numeric fault code readout, which greatly assists service technicians. As part of the development we wrote a Windows program that connects to the CA20 and provides production line commissioning and diagnostic information.

A couple of years into production of the CA20 Apac's chief engineer, John Vivian, told us how pleased they were with the CA20. The build quality was excellent, and the production-friendly design had literally doubled the capacity of their production area by streamlining throughput. Cost were reduced by reducing the labour skill level required, in addition to the amount of labour required. All in all they were reaping indirect benefits from a custom SPLat controller that well exceeded the obvious direct B.O.M. cost reduction. Read his letter.

Apac was closed down by Carrier corporate in 2009, in the wake of the global financial crisis. One can only wonder why a successful operation, with exports as far afield as South Africa, Saudi Arabia and Siberia would be dumped, but it was certainly nothing to do with our controller. However, all is not lost for SPLat! The CA20 became almost legendary in the commercial/industrial HVAC industry in Australia, because the technicians love it for its reliability and diagnostic features. We are therefore now offering a newer, modernised design, the HVAC26 (pictured) to the industry in general. It rests solidly on all that was good in the CA20, but with a number of new features to make it even better to use. The CA20's reputation has also led to us being invited to engineer a number of custom control systems related to energy saving and the management of air-conditioners in Australia's huge mining industry.
More case studies...